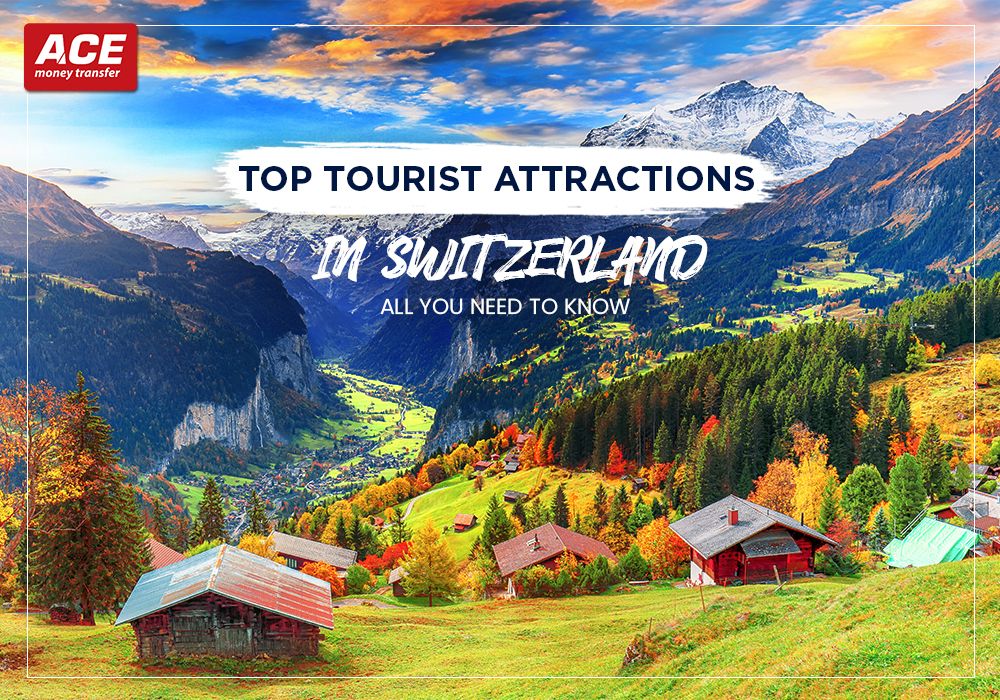 Top Tourist Attractions In Switzerland – All You Need To Know

Switzerland is a destination known for its mountains, clocks, chocolate, cheese, and political neutrality. The fact that the country has three national languages is one of its distinguishing features. You will hear French, Italian, or German depending on where you go in Switzerland.

Even though there is no Swiss language, those living near the German border frequently speak a dialect of German known as Swiss German. There're so many places to see and do within Switzerland's borders that expats and visitors alike will have difficulty choosing where to go next.

For tourists planning a trip to Switzerland, here are some of the top tourist attractions in Switzerland.

Mount Pilatus, situated in the region of Lake Lucerne, is steeped in legend. The mountain was named after the famous biblical Roman governor Pontius Pilate, who was said to be buried there. Medieval Europeans believed the mountain formed as a dragon rock falling from the sky.

The 2,100-meter (7000-foot) peak offers spectacular views of the Swiss and French Alps and Lake Lucerne. There is a high-altitude Christmas market in the winter, and there are numerous hiking opportunities in the summer. This region is reached by the world's steepest railway, with grades exceeding 48%.

A trip to the Swiss Riviera would be incomplete without visiting the medieval Château de Chillon. The castle, which is situated on an island in Lake Geneva near the tourist resort town of Montreux, dates from the 10th century and serves as a crucial water fort.

The castle rooms were later filled with all kinds of art and antiques that visitors may see today, and it became a lakeside vacation retreat for the affluent Counts of Savoy. The castle is Switzerland's most visited historical monument and a must-see while visiting the country.

This massive water fountain is a well-known landmark in Geneva. The Jet d'Eau, which shoots 140 meters (460 feet) into the air and can be seen from miles away, is located where Lake Geneva flows into the Rhone river. At any given time, 7 tonnes of water are in the air, much of it spraying onlookers on the pier below.

Twice or three times a year, it is illuminated pink, blue, or another hue to honor a humanitarian event. The community swimming area, known as the Bains de Paquis, is one of the greatest sites to watch the fountain.

The Jungfrau region's largest ski resort town is Grindelwald. Summer and winter activities are available in this picturesque mountain village. Summer visitors can experience some of Europe's most popular rock climbing destinations and magnificent hiking trails. Visitors can go skiing or tobogganing in the winter.

Many nearby mountain peaks and passes make this an appealing destination for photographers and nature lovers alike. Ice sculptures at the World Snow Festival will delight festivalgoers.

The Jungfraujoch is an Alpine wonderland that truly deserves the moniker Top of Europe. The Jungfraujoch, technically a glacier saddle between two mountains, is one of Switzerland's best – and highest – attractions. Don't be put off by the altitude; there's plenty for the whole family, from mountain climbing to tobogganing.

It's easy to see why Rhine Falls is one of the best things to do in Switzerland as Europe's most powerful waterfall. Several viewing decks allow visitors to take in the beauty of the waterfall, which is located near the northern town of Schaffhausen.

If you're feeling particularly daring, you can rent a canoe and explore some nearby castles from the water. The falls hold a stunning firework display every August as part of Switzerland's National Day celebrations, drawing tourists from all around the country.

Bern's oldest and most historically significant gate is the clock tower gate. The gate was constructed in the 1100s, and the clock on the tower is one of the world's most beautiful and oldest clocks. For centuries, this clock, which was built in 1530, operated as the city's master clock.

Both pro and amateur photographers will enjoy the Baroque design with gold accents. A single central mechanism powers an astronomical clock, figurines, hour chimes, and two tower clocks. This is one of the main reasons that has helped Switzerland become one of the world's leading clockmaking countries.

Visit the southern city of Lugano to see Switzerland in a whole new light. Nestled on the shores of Lake Lugano, the city dubbed "Monte Carlo of Switzerland" combines Swiss and Italian cultures for an unforgettable weekend getaway.

With its many museums and Mediterranean breezes, you might think you're in nearby Italy when you visit. Outside of the city, impressive villas dot the lush hillsides that rise from the lake.

Switzerland is an expensive country for both tourists and residents alike. For expat residents who decide to make this beautiful country it’s home, it’s even more important to keep track of their finances. After all, once you receive your first Swiss paycheck you would want to send money back home to your loved ones. Thankfully, there are plenty of online platforms that can help tide you over by letting you send money online back home like ACE Money Transfer. For more information, read our guide to international money transfers.

Switzerland is small, but it has a lot of interesting places to visit. Visitors come for the breathtaking scenery, but they are also captivated by the numerous cultural attractions. Explore this magnificent country with our list of Switzerland's best places to visit.

Tips
PREVNEXT
Everything to know about Digital Wallet Services in Pakistan
Where is the Global Exchange Market Moving? Things to Expect in 2023