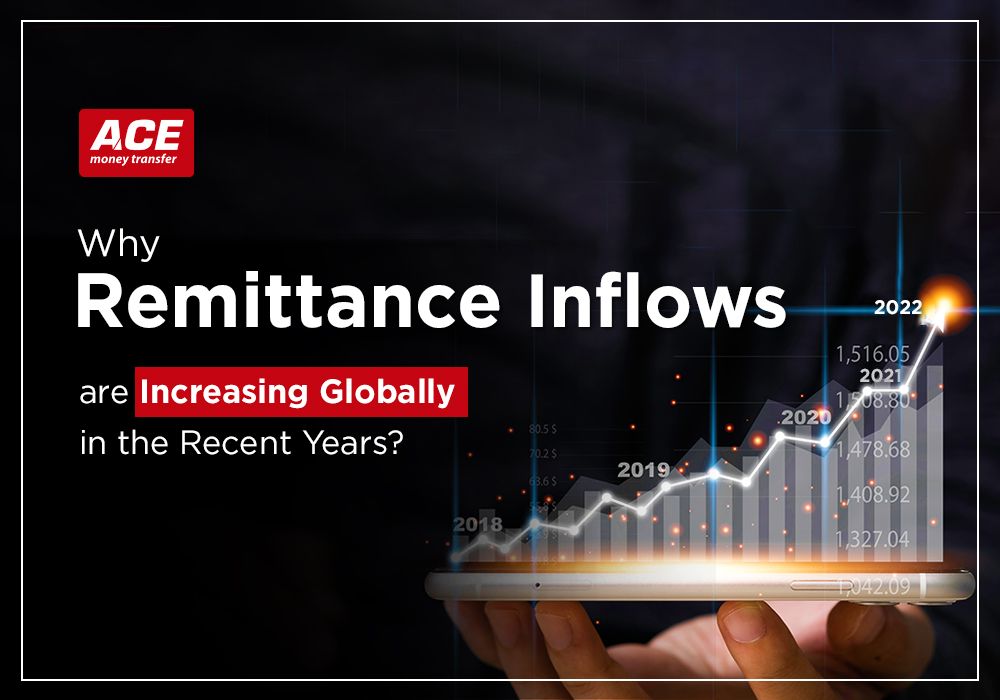 Why Are Remittance Inflows Increasing Globally In Recent Years?

Remittances have increased dramatically in recent decades, capturing the attention of researchers and policymakers and sparking debate about their benefits and drawbacks. According to the World Bank’s estimates, 2021 has seen almost 7.3% growth in remittances that reached $589 billion. There are several contributing factors in this regard; however, supporting the families’ financial needs in low-to-middle-income countries remains the primary reason.

Countless people from underdeveloped and developing countries move abroad to find better jobs and manage their households back home when they send money online to their families from abroad.

Remittances can significantly improve the quality of life and the overall economy in the recipient country. Let’s learn about how many factors have contributed to increasing the remittance inflows worldwide.

Migration Trends And The Need For Money Transfers

More people are found migrating to other countries now than ever before. Currently, an estimated 258 million people live outside their origin. Every migrant leaves home for various reasons, but they all bring their life experiences, knowledge, culture, and ambitions.

They gain new skills and knowledge as they adjust to life in their host countries. They also send money home to support their families and communities in their home country. From the 1990s until now, the volume of financial remittances has substantially increased.

Immigration has existed throughout human history, and people have moved from their homes for many reasons for centuries. Working overseas maybe your life's most prominent and best adventure, but it may not always be perfect.

You can live in the most beautiful spot on the planet and still have some troubles, friend crises, and debts to pay. When you're having a bad day, you must look around to remind yourself that you're living your dream.

Some of the major problems that push people from developing and underdeveloped countries to move abroad include:

One of the biggest problems that every underdeveloped nation faces is lacking suitable job opportunities. A vast majority of people remain unemployed or idle for long, negatively impacting the country’s economy. By 2020, around 224 million people were recorded to be unemployed.

The countries with weak economies cannot provide sufficient facilities to their people. More than 700 million people, which make up almost 10% of the world’s population, still live under the poverty line. These people do not have proper food, health, and education facilities due to the lack of resources.

Several people move to the developed world, considering that they can earn better than what they have in their native land. People can’t make enough to meet their financial needs with low wages in poor economies worldwide. Eventually, they look for jobs abroad with better wages to support their families. An expat working in a developed country earns better and enables the beneficiaries to receive more after converting foreign currency to local one when making an international money transfer.

People in low-to-middle-income countries that don’t have suitable earning resources can’t face growing inflation. Thus, they live in poor conditions without even the basic necessities for life, such as healthy food, better health conditions, pure drinking water, etc. Rising inflation takes these necessities out of their reach, which is one of the primary reasons that pushes these people to move abroad.

In some weak economy countries, people somehow acquire local education at their best. Nevertheless, they remain compelled to live in poor conditions due to the lack of resources and career opportunities that suit their qualifications and interest. Ultimately, they have to seek their dream jobs abroad where they can work and earn sufficiently and excel in their careers.

Working overseas teaches you to enjoy every day, especially the terrible ones. It's a terrific lesson in letting go of expectations, embracing challenges, and making the most of the present moment. Poor health care, a poorly educated and qualified labour force, and poverty create a fertile environment for people to migrate in search of a better life.

According to World Bank's Migration and Development Brief released recently, remittances to low - and - middle countries (excluding China) are likely to exceed FDI and ODA for the second year in a row (ODA).

This highlights the importance of remittances in providing a critical lifeline by supporting household spending on essential items such as food, health, and education during economic hardship in migrants' home countries. An expatriate must make an international money transfer every month to overcome the issues of hunger, health, and other financial problems of their loved ones.

Remittances have several positive impacts on the beneficiary families and their countries. When an expat sends money home from abroad, it helps them acquire better food, health, and education facilities. The possibility of investing in any business or running a new startup to be independent in your native country is yet another positive influence of remittances. When the quality of life is improved for families with better resources, it strengthens the country’s economy overall. Remittances also help improve the literacy rate and decrease unemployment which supports economic growth.

The World Bank publishes annual estimates of global (and bilateral) remittance flows based on the country's balance of payment figures collected by central banks and aggregated by the IMF. The data include remittance inflows and outflows from countries.

Despite COVID-19, remittance inflows remained resilient in 2020, declining slower than anticipated. Officially registered remittance flows to low- and middle-income nations totalled $540 billion in 2020, just 1.6 per cent less than the $548 billion amount in 2019.

Such a massive rise in remittances indicates that more and more people migrate to developed countries every year, seeking better work opportunities.

Remittances are more critical than ever, especially in rural regions, where they provide additional prospects for rural transformation. International remittance inflows are one of the most vital macroeconomic drivers promoting economic growth in developing countries worldwide. The surge of migrants seeking better employment is undoubtedly the chief factor behind increasing global remittance inflows. These diasporas spread globally always keep looking to find the best way to send money internationally to transfer funds back home securely with the best possible exchange rates.

News Tips
PREVNEXT
How to Track your Online Money Transfer?
Where is the Global Exchange Market Moving? Things to Expect in 2023