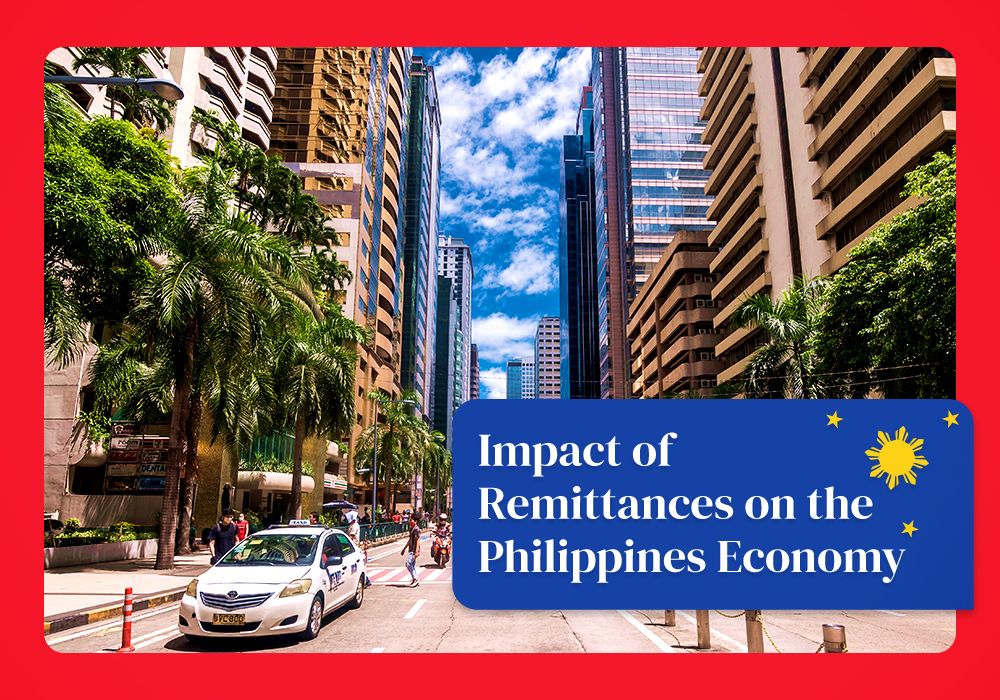 Impact of Remittances on the Philippines Economy

The Philippines: Remittance and Economic Growth

The world's 32nd largest economy, the Philippines, has been one of the most dynamic in the East Asia Pacific region. Its average annual growth moved up to 6.4% between 2010 and 2019 from 4.5% between 2000 and 2009. Such an economic rise has been possible due to a growing middle class and a large and young population.

The Philippines' economic dynamism is rooted in strong consumer demand supported by a vibrant labour market and a general upward trend across finance, insurance, tourism, business process outsourcing, real estate and other industries.

Besides these industries, foreign remittances have stimulated the country's overall monetary development, declining poverty from 23.3% to 16.6% during 2015 – 2018. A massive populace of overseas Filipinos send money to Philippines every year and elevate the living standards of millions of people, positively impacting the gross domestic product rate.

Let's get into the insight of how robust foreign remittances have uplifted the country's financial strength with a brief overview of its progressive journey in recent years.

On average, the economy remained around 4.5% until the 1950s. For the next 30 years, there was a steady increase until the mid-1980s, when the global financial crisis took down the economy with a storm. The GDP fell to its lowest, about 2.01%.

However, with the expansion of its diasporas worldwide, the country began showing signs of stability and growth. And as of Q4 2020, around 10 million Filipino expatriates reside in different countries, sending remittances to their families back home.

To put it into perspective, the Philippines was the fourth-largest recipient of global remittances with $26.32bn in 2020.

There are a few more factors that have influenced its economy to grow over the past few years, including:

Despite the rough political conditions in recent years (2015 onwards), the country has had the privilege to reap benefits from a few notable export policies. According to recent figures by the Philippines Statistics Authority, by December 2021, the country has achieved $17.75 billion on its total external trade in goods, indicating a 25.4% annual growth rate. These measures show that the Philippines government has constantly been striving to execute strategies that put its national economic progress on track.

Despite all the odds, the government of the Philippines has ensured to provide a suitable environment for businesses in different industries. The country's partnership with the Asian Development Bank (ADB) with Strategy 2017-2022 is an example of a few focused initiatives to help support people investing in different business industries. The ADB's country partnership strategy 2030 targets people living below the poverty line to set up small businesses and become independent, eventually aiding the country's overall economic growth.

The medium, small, and micro enterprises (MSMEs) are essential to the Philippines' economy and growth. These MSMEs hold 90% of their total business by employing about 5.7 million people with an overall 35% contribution to the domestic economy.

Undoubtedly, big businesses prove to be robust enough to control the stock market. However, small businesses and start-ups are considered critical growth influencers who help keep the economy upward. Countless Filipino natives in the country can find opportunities and pass over the poverty line with the help of small businesses in several industries.

Besides these measures in the business sectors and MSMEs, one of the significant factors influencing the Philippines' economic growth is its efforts to eradicate poverty.

Overseas Filipino Workers (OFWs) are significant contributors towards eradicating poverty. The Philippines Statistics Authority (PSA) released a report stating that between 2015 and 2018, the percentage of people living in extreme poverty fell from 22% to 16% through the remittances these families received. During the same period, the remittance volume grew by 13%, which further reached $31.42bn in 2021, showing a 5.1% increase compared with 2020. The reducing number of people below the poverty line indicates economic growth and development. Overseas Filipinos who continually send money to Philippines online have been contributing to poverty eradication in the country.

Overseas Filipino workers (OFWs) are among the most sought-after workforces globally due to their hospitality and welcoming nature. You can find them across many industries, including service, finance, hospitality, to name a few. This diversity within OFWs allows them to make substantial monthly earnings from which they transfer money to Philippines to support their families. Naturally, the OFWs prefer convenience, speed and security while choosing their remittance service provider. ACE Money Transfer becomes their choice in many cases, being one of the leading remittance companies globally satisfying their preferences mentioned above.

The Philippines has seen a gradual upward trend in economic strength and GDP development. Besides several other business industries, foreign remittances have remained a vital element contributing to poverty eradication, creating job opportunities, raising investments, encouraging people to invest in start-ups and small business enterprises, and an upward trend in remittances could only mean even better growth for the country altogether.

To send money online to Philippines from the UK, Europe, Australia, Canada, and several other countries, most customers trust ACE Money Transfer.

Find out more about the company's products and services on the website.

NOTE: The statistics and figures have been taken from the official website of the Department of Trade and Industry, Republic of the Philippines.